in Windows 8.1 - on 5:10 PM - No comments
Many screenshots of Windows 8.1 build 9385 have leaked onto the web over the last few days, revealing a few new changes to the currently in development OS.and today a new screenshot leaked to give more information's about this build and made all windows users want to test it...see picture above: 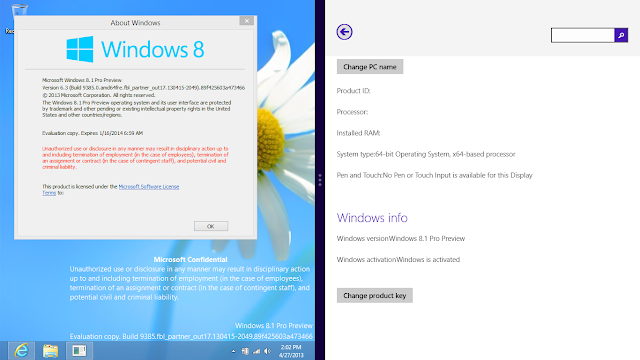 Various builds of the upcoming OS are being tested by Microsoft partners and other developers.

Windows 8.1 preview seems that there was more than meets the eye as screenshots of Windows 8.1 build 9385 have already surfaced on the Internet today. This would drop additional hints at the possibility of the build being leaked out in the days ahead. Apart from the desktop image, there was also a screenshot of what looks like a user being in the middle of the ISO.and the iso file come with this name :9385.0.FBL_PARTNER_OUT17.130415-2049_X64FRE_CLIENT_EN-US-IMP_CCSA_EN-US_DV5.iso

as you can see in the picture above:

The newest one to make an appearance is Windows 8.1 build 9385. This particular version has been sent to a select few for testing purposes. And while an ISO image of this new version has not yet leaked for public so we need to wait more time maybe we will get it too.
Tweet
Labels: Windows 8.1