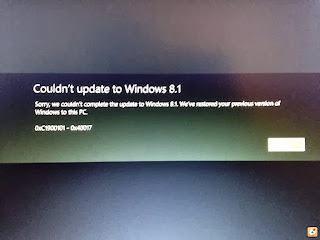 Microsoft released Windows 8.1 on Thursday, after tweaking the operating system designed for various devices that had confused some users.

The update is free for those using Windows 8, released last year to help Microsoft navigate the transition from traditional personal computers to mobile devices such as tablets.
The revamped version brings back the "start" button, which disappeared last year and prompted protests from some PC users unaccustomed to the tiled menu adapted for touchscreens.
"Windows 8.1 demonstrates our commitment to continuously improving the product to create a richer customer experience," Microsoft's Brandon LeBlanc wrote on the company blog.

But while a lot of windows 8 users are trying to update their OS to windows 8.1 they hit by Blue Screen, 0xC1900101 - 0x40017 error,Microsoft is having a hard time figuring out how to handle a widely reported problem when Windows 8 users update to Windows 8.1

The Microsoft Answers forum is abuzz with a problem that seems to affect many people trying to update from Windows 8 to Windows 8.1. It's a show-stopper that throws up two Blue Screens when the Win 8.1 installer reboots. Microsoft has a couple of suggestions for recovering from the problem, but at this point it doesn't look like the solutions fix the problem. Further confounding the situation, the problem existed back in June, with the Windows 8.1 Preview Milestone, and apparently hasn't been fixed.
Tweet
Labels: Windows 8.1, Windows 8.1 Tutorials