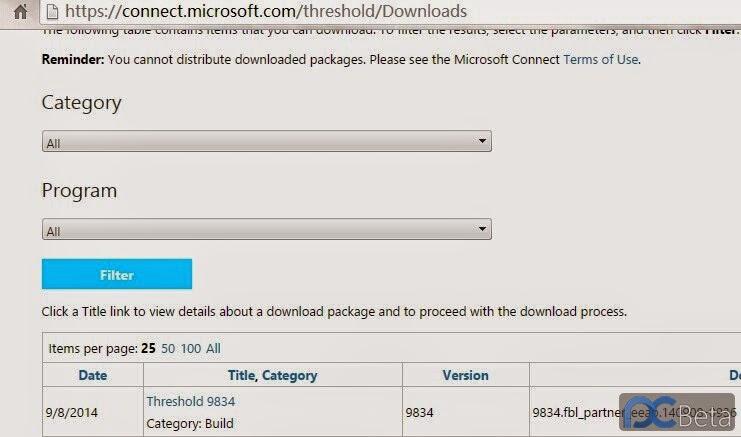 Microsoft is said to be ready to launch Windows 9 at the end of this month or the beginning of next month, with a beta / preview download available on a date soon after. Code named Threshold, the new operating system is expected to finally fix our gripes with Windows.

Microsoft already begun inviting reporters to an event concerning “what’s next for Windows.” ... It doesn’t take Nostradamus to connect the dots as Microsoft won’t confirm its agenda, but all conventional wisdom points to some type of preview of Windows 9. Some build of Windows 9 has been provided to hardware partners like build 9834 and build 9821 and build 9841...details have steadily leaked over the past few weeks.

A new screenshot has been posted on PCbeta shows the link from where you can download windows Threshold build 9834 "https://connect.microsoft.com/threshold/download" but no one has the access to the download now except partners.Even there is a specific invitation code To download this build from the link above if you can access to it..

For now called Windows 9 and also known as Threshold, should address much of the criticism.Microsoft has been secretive about its upcoming OS so far, but thanks to several leaks some details on Windows 9 start to take shape. In May 2014 we obtained information about the possible release date of a first beta of Windows 9, abut now we have just few days to put our hands on the new build . Especially Microsoft’s personal assistance software Cortana will make its entrance in Windows 9.
Tweet
Labels: Windows 9