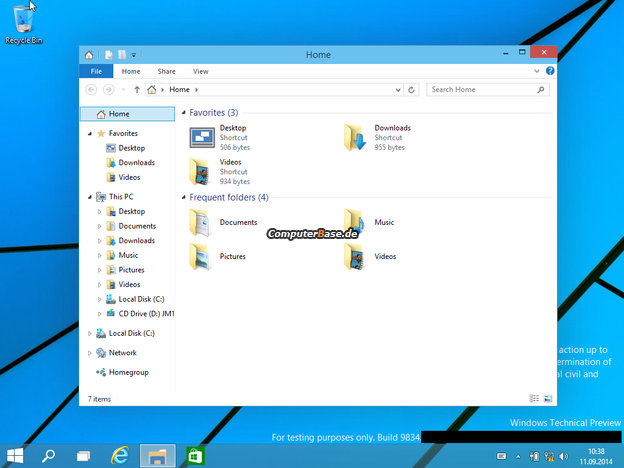 Microsoft Corporation (NASDAQ:MSFT) will offer a look into its next operating system during an event this September and Windows Threshold first technical preview release is due in September 30, we knew that certain top Microsoft partners have already access to the early bits. And today it seems that those early bits for the next version of Windows, which still may or may not be called “Windows 9″, have already leak into the web.

Even though it was rumored that Windows 9 Preview might not come with a Start menu, it appears that it’s already there in build number 9834, featuring a design that’s very similar to what the company itself presented at the BUILD 2014 conference in April.

Those images of Technical Preview are nothing new on what we've speculated here. This is bringing the metro tiles to desktop start menu. You can from there access to documents, images, the PC settings and the Explorer. They are now optional features embedded into it. Apart from the builds version and few other things it is not so much different from Windows 8.1 desktop environment and you can see the notification center and multiple desktops.
Microsoft has released the new Start menu is also designed to be displayed, as in previous versions of Windows, the login user name at the top. New, however, is the integration of a button that allows you to shut down the PC, or the changes in the standby mode or restart in this area.
Windows 9 Preview will launch at the end of the month, but at this point it’s not yet clear whether the company is planning to make all the new features that you can see in these screenshots available to all users or whether they could be released at a later time.
Tweet
Labels: Windows 9