Dynamix has once again created an incredible historical simulation of air combat with Red Baron 3D. Red Baron I and II were well received with their excellent take on World War I air combat, and Red Baron 3D brings back the excellence with the wonders of 3D accelerator technology and much, much more.

The game boasts a number of good features such as 3D planes, buildings, bridges, and the occasional skydiving pilot (without a parachute). Also, the Glide-enabled features really add to the fun and realism of the game. The sound effects must also be mentioned as a feature because they were really extensive, from the sputtering of the engine every once in a while, to the groan of the pilot as a bullet hits him. Also, the multiplayer is rather good because of the constant online war going on. WON.net has a WWI scenario up and players run the battles and determine the outcome. Even though it has a small following, it is still pretty cool.

The gameplay in Red Baron 3D is really very good with the ability to alter a large number of realism settings to change how the planes fly and whether or not you die. Though the maps can be big, and the planes are slow, there is a time compression feature that is very useful. The missions are varied, as is the campaigns and the Fly Now feature can be set to random, or preset, and pits you against enemy aircraft every specified number of minutes. Without radar and guided systems, the game really tests your dogfighting skills and determination. Online play will also test you because it can get pretty hairy if there is more than 5 people in a close-quarter dogfight, which there usually is. If there is lag, though, it is really hard to fight, because even hitting an enemy takes a whole lot of work. In the end, though, it is worth it to see the plane spiral to the ground and explode.

Adds capabilities to determine application compatibility problems and effects.
Addresses an issue in which an application such as Microsoft Word or Microsoft PowerPoint seems to freeze when you open a document that contains a large EMF file. After you install this security update, you can stop the application without waiting for win32k.sys to finish processing the EMF file.

So if you want to download it you just need to go to windows update from control panel and check for new updates.
Read more
Labels: Windows 10, Windows 10 Games, Windows 10 Tutorials

How to install play Windows XP solitaire in windows 10 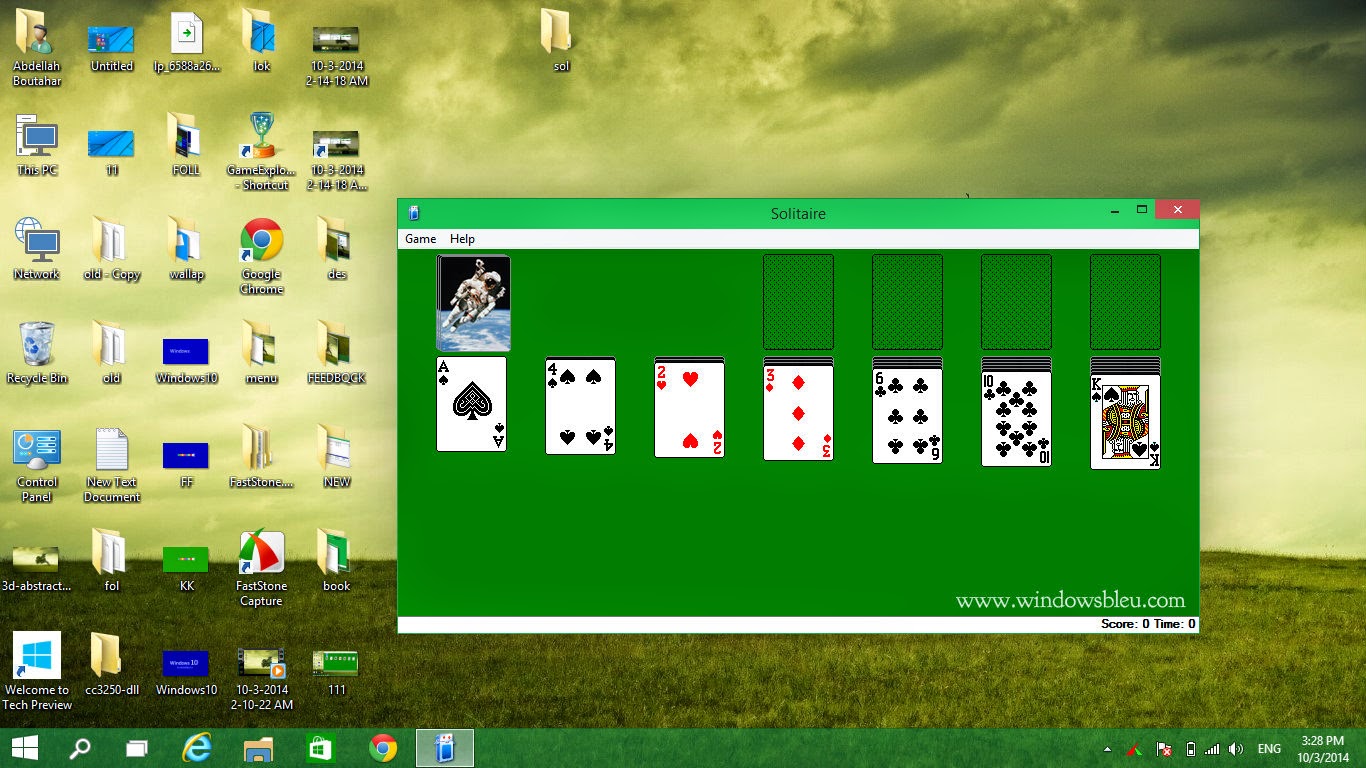 Games like Minesweeper, Solitaire, FreeCell or Hearts have been included in most versions of the operating system by default. They have a large fan base not only at home but also at offices throughout the country, and if they have not been blocked in an office, you usually find some employees playing a game or two.

With Windows 8 and windows 10 comes a change to how games are being made available to the user of the system. Windows 10 does not ship with the games installed, and there is no "games" feature that you can install optionally like you could under Windows 7 Professional to add those classic desktop games back to the system.Instead, you find those games listed in Microsoft's OneStore.

But if you are a fun of solitaire an you like the old Windows XP solitaire you can try it and enjoy it in your windows 10 TP.

1- Download XPsolitairetoWin10 file (these have been taken from XP):

2- In your Documents folder, create a new folder named "Solitaire".

3- Put the files "cards.dll" and "sol.exe" you downloaded earlier in this "Solitaire" folder.

4- go to:
C:\Users\Username\AppData\Roaming\Microsoft\Windows\Start Menu\Programs
(make sure you change Username to your username)

5- Create a folder named "Games", and create a shortcut (in that folder) to the file "Sol.exe"

you should have Solitaire on Windows 10 and you can now play it.
Read more
Labels: Windows 10 Games, Windows 10 Tutorials
Older Posts Home